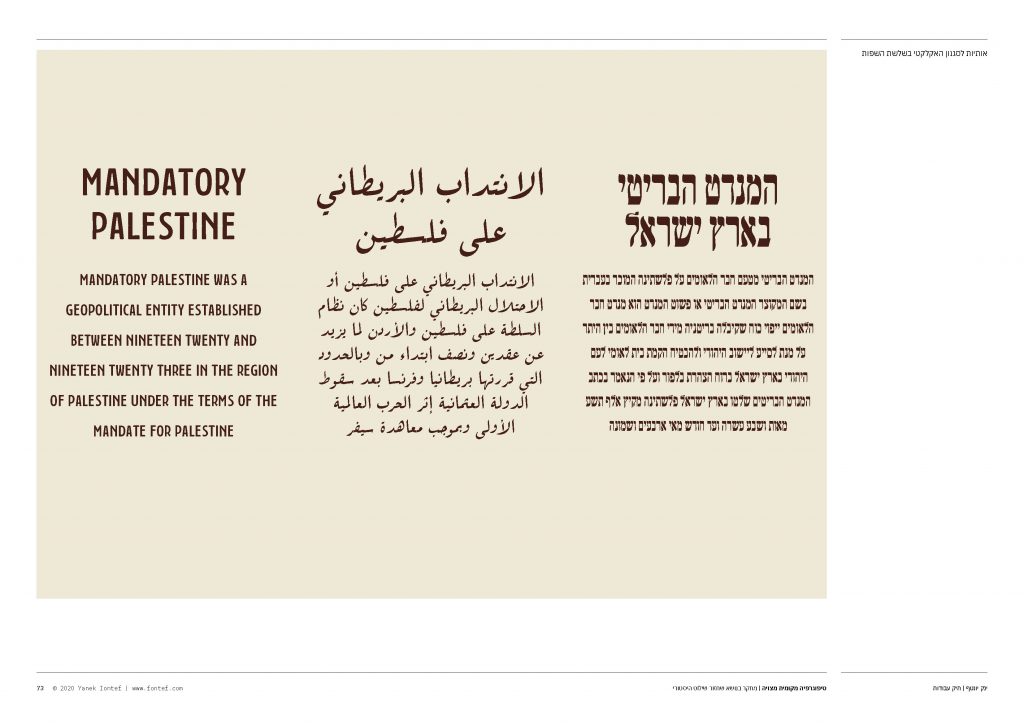 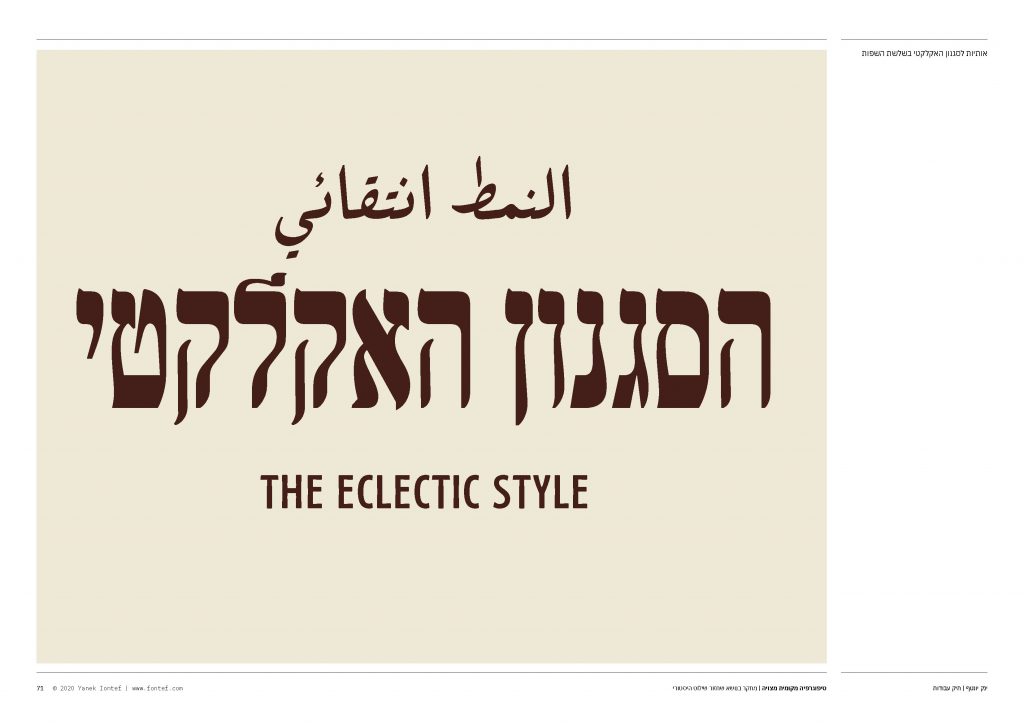 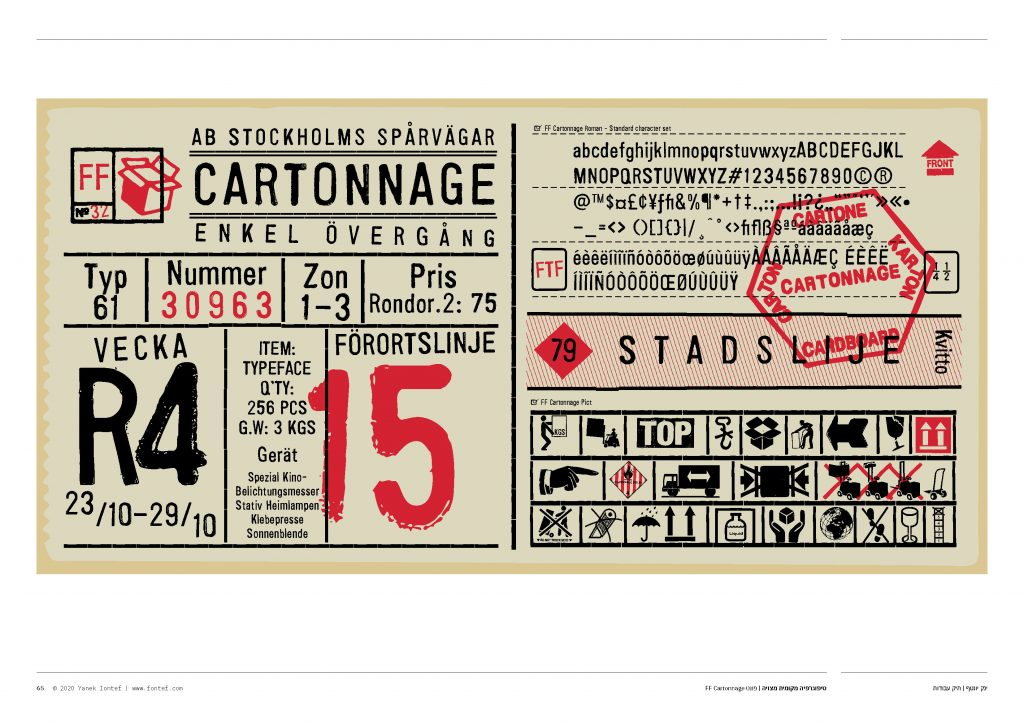 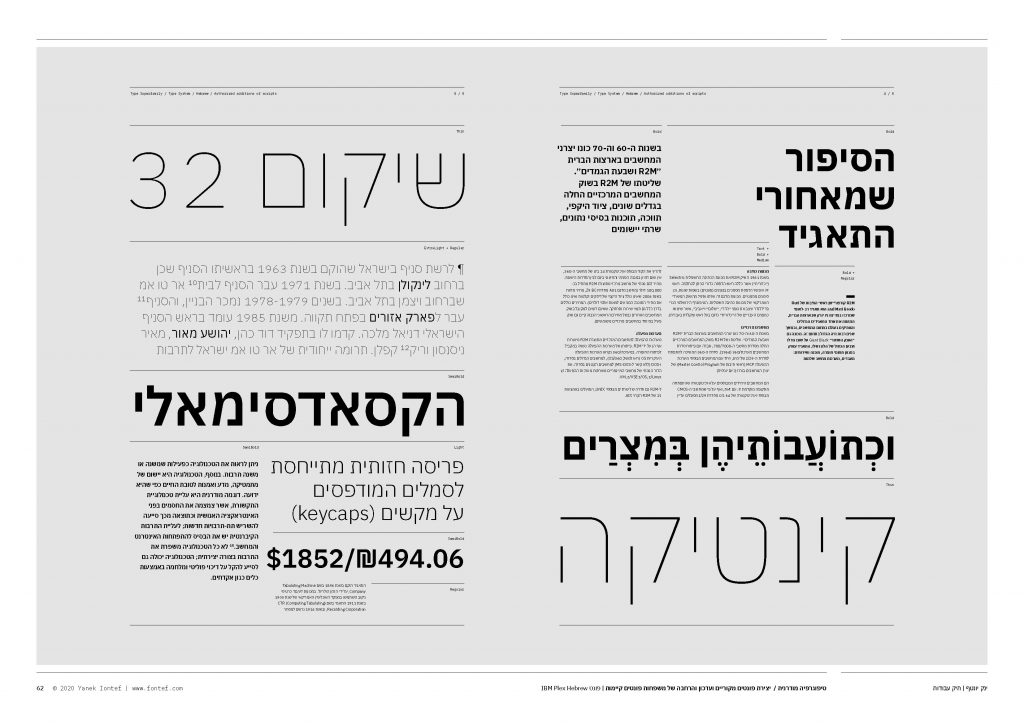 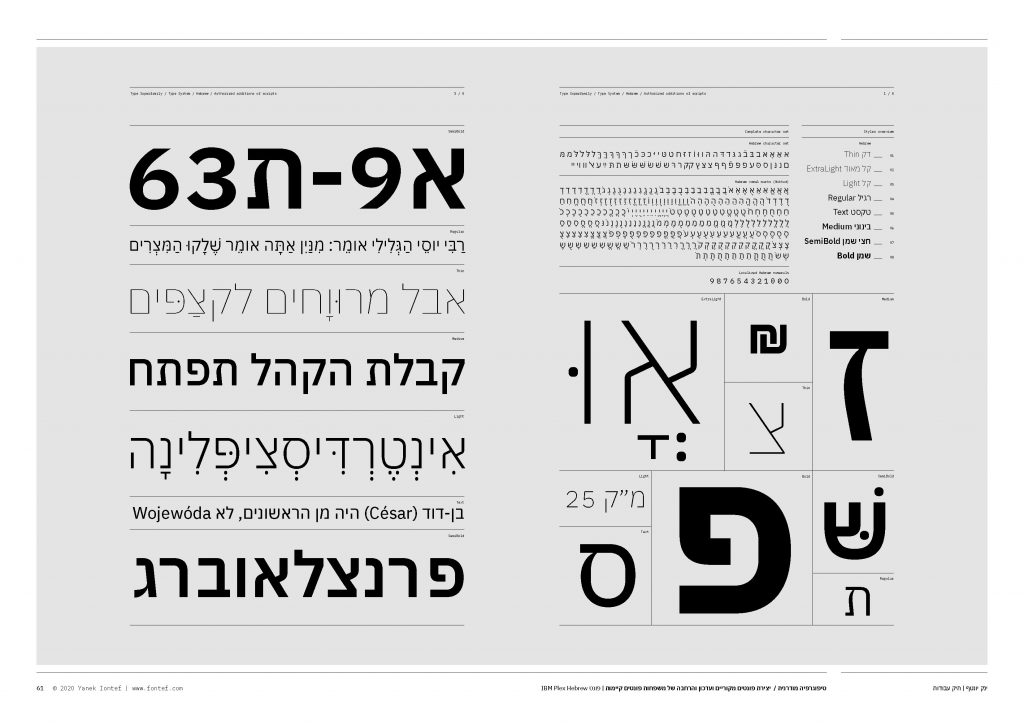 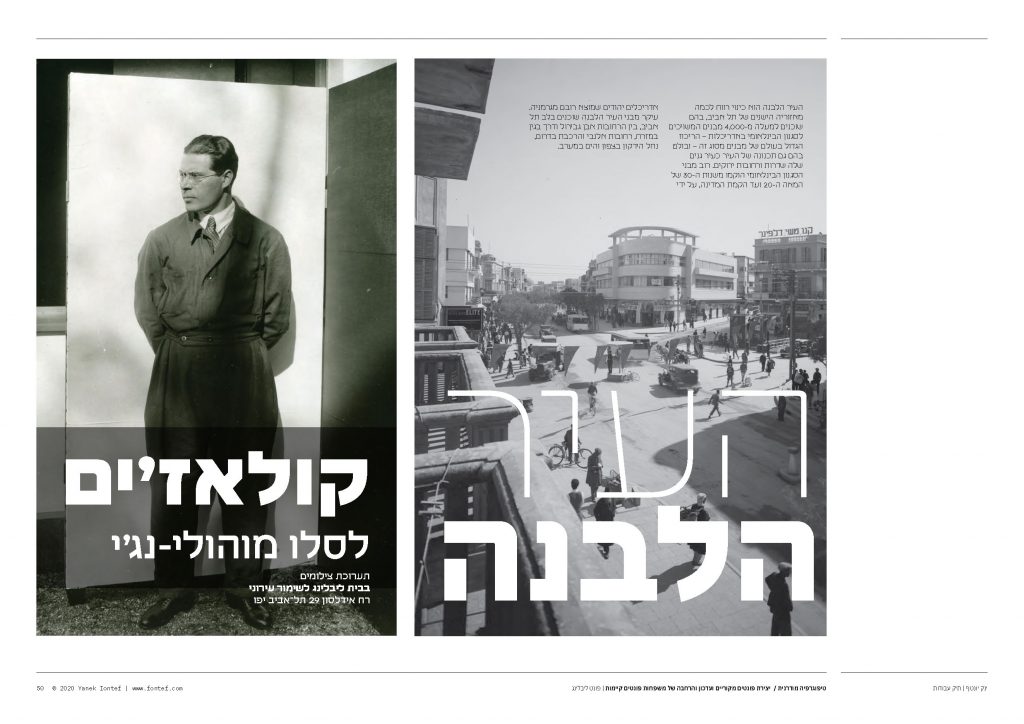 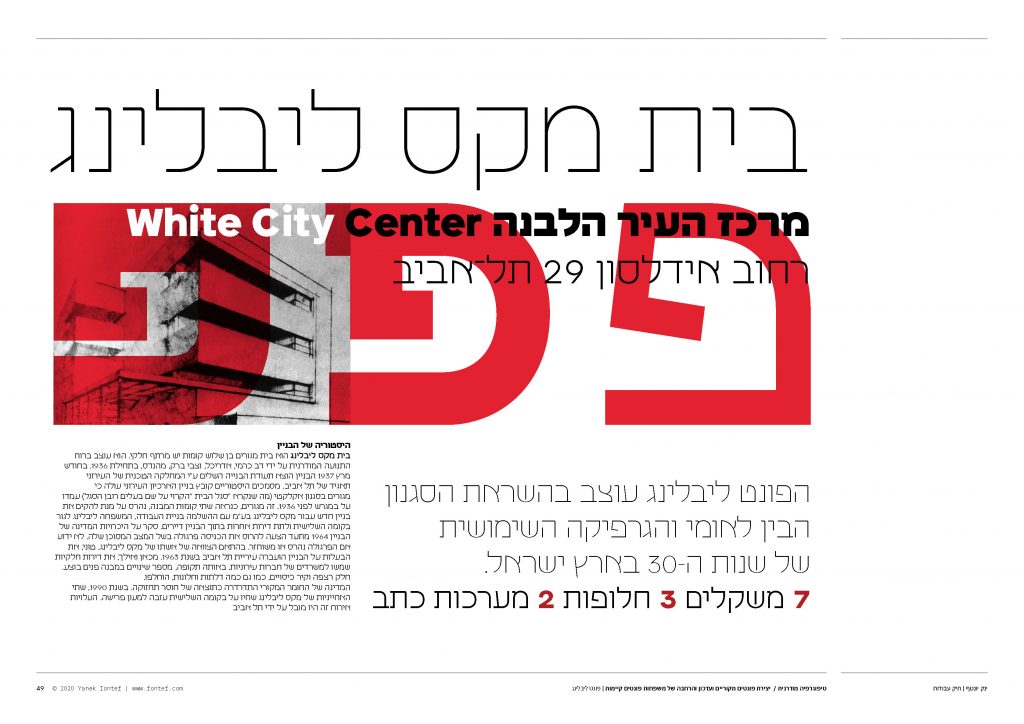 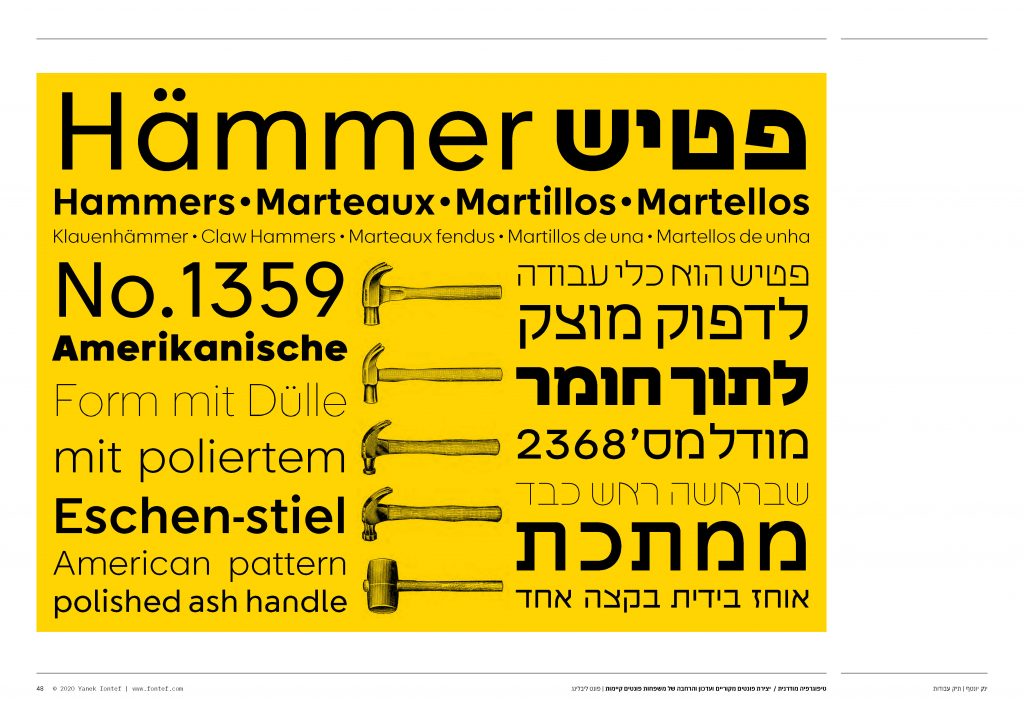 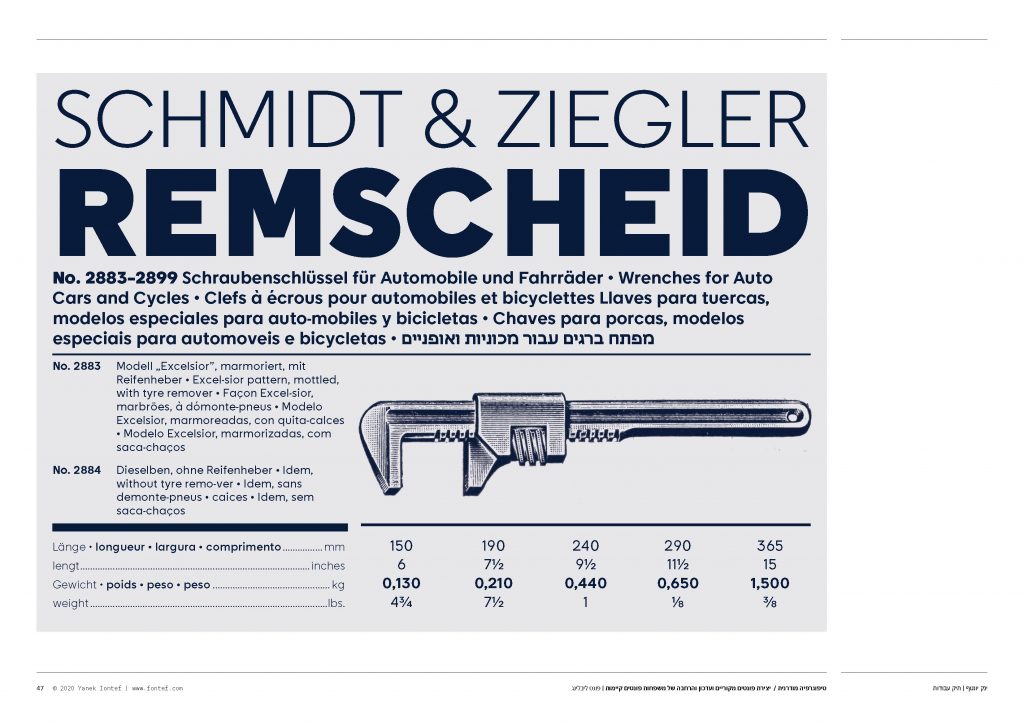 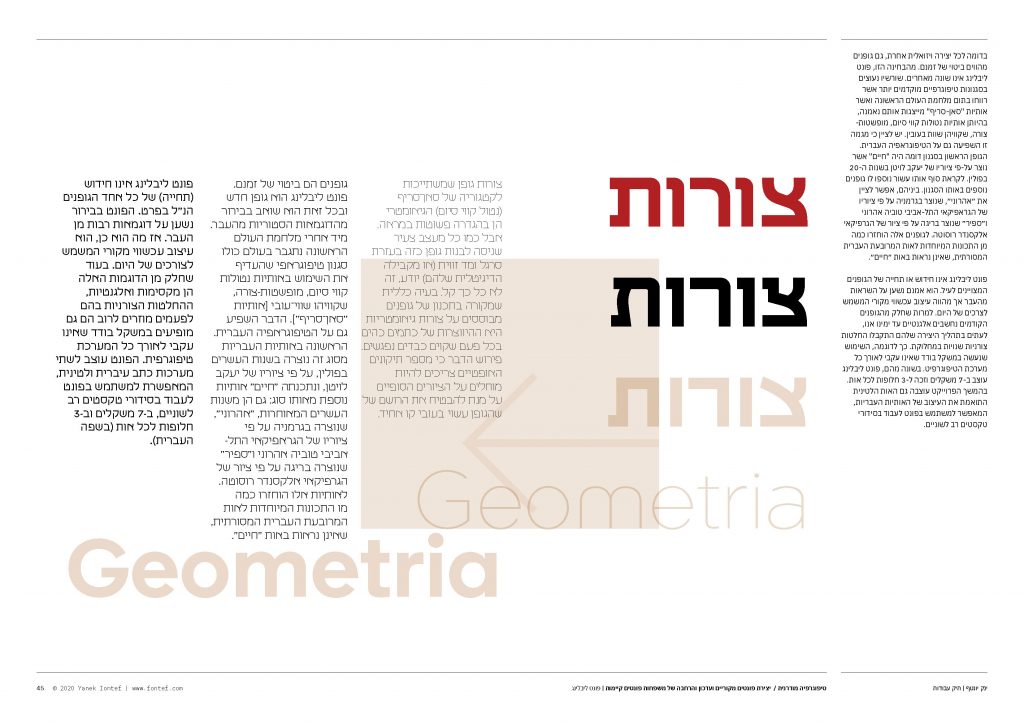 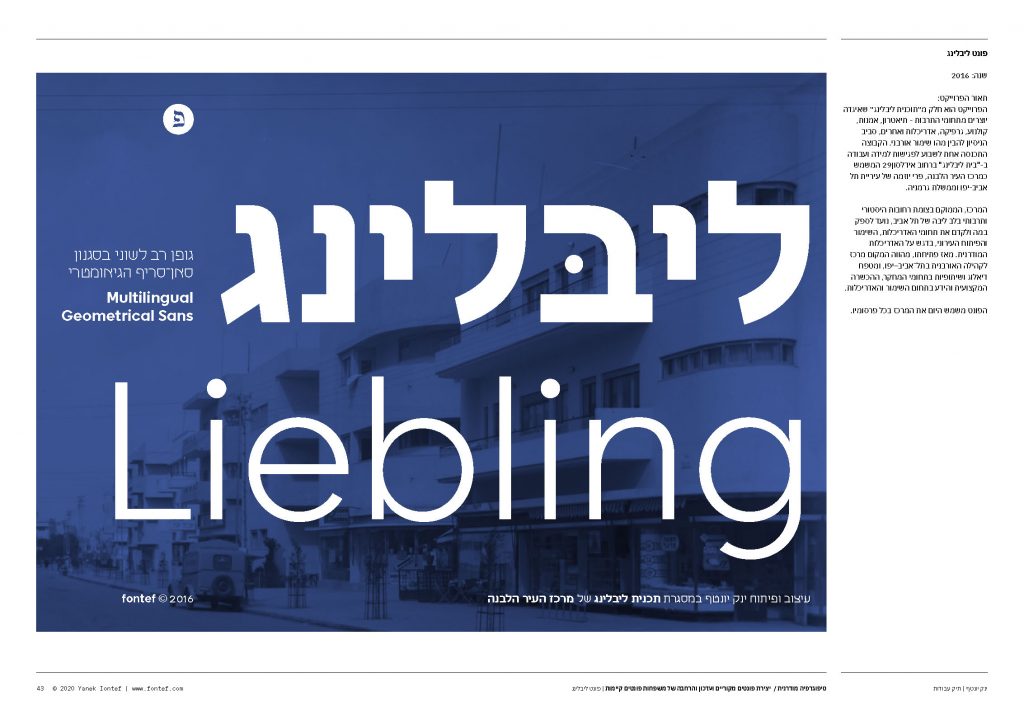 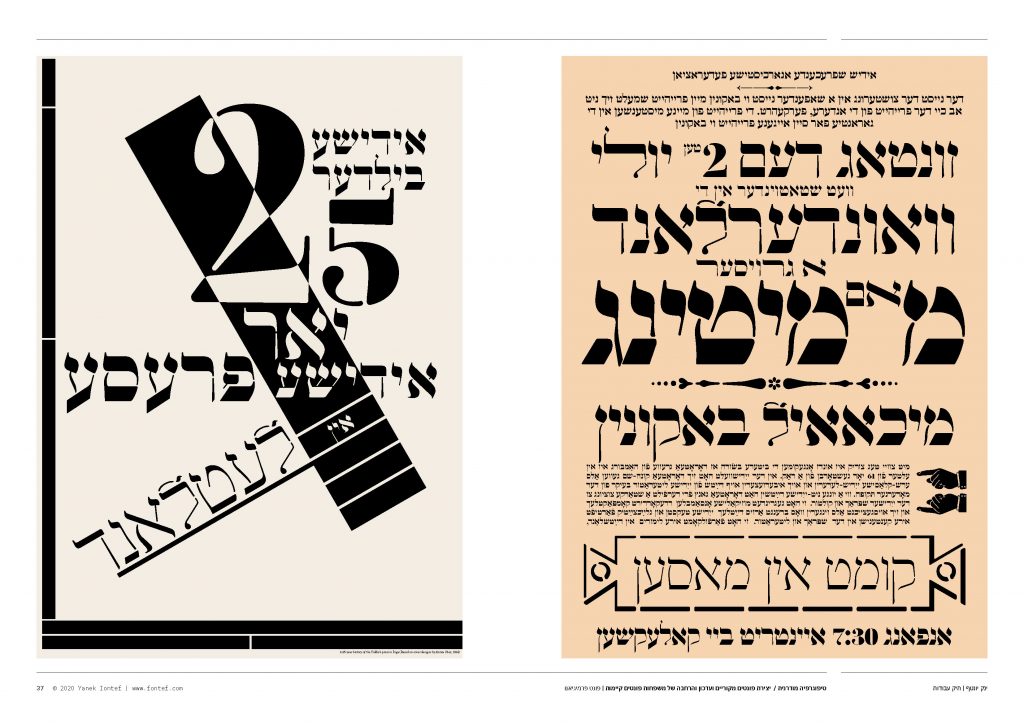 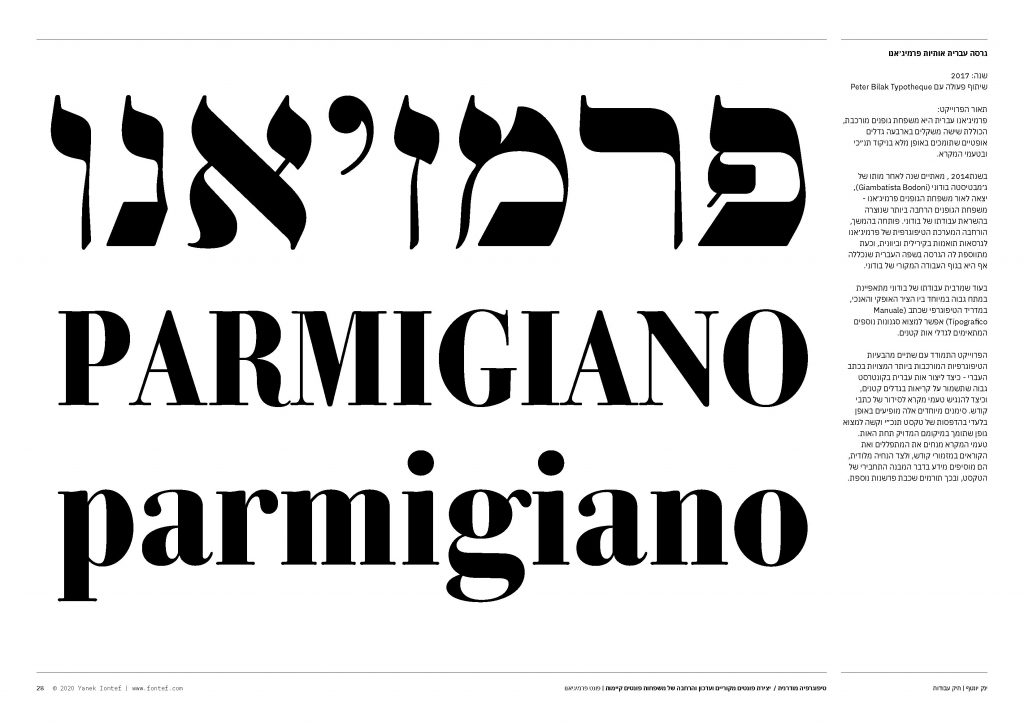 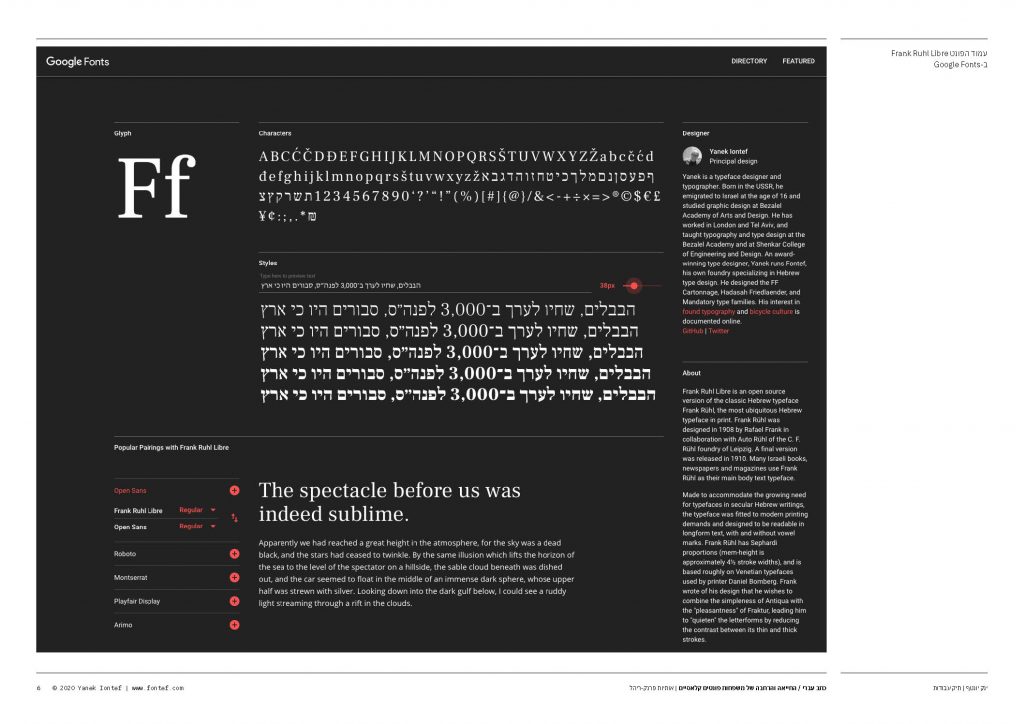 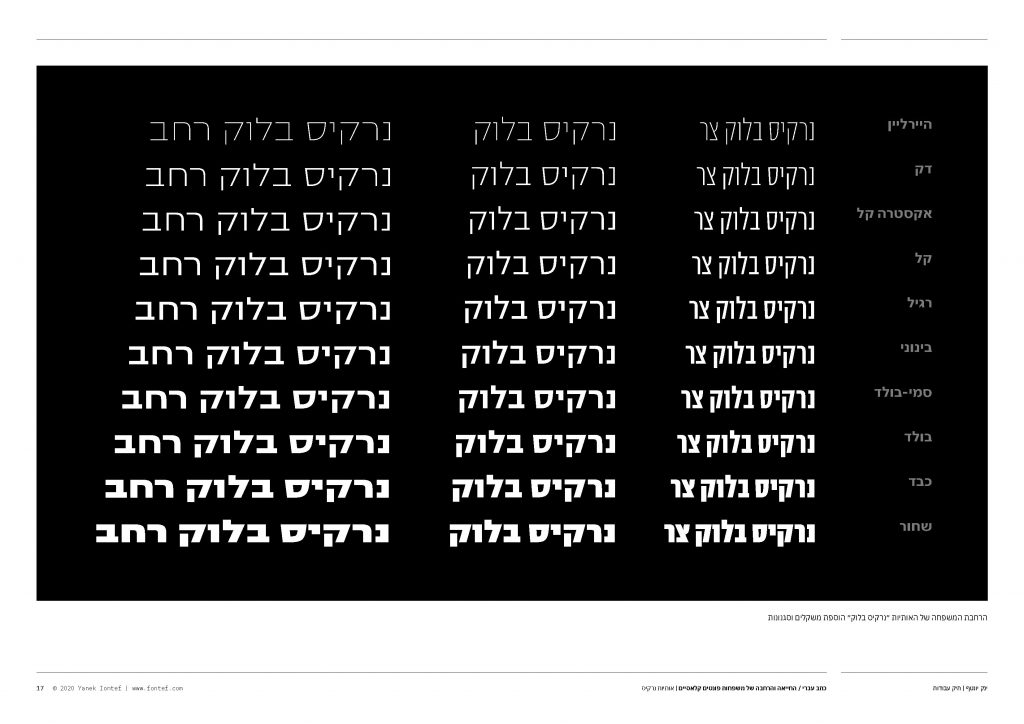 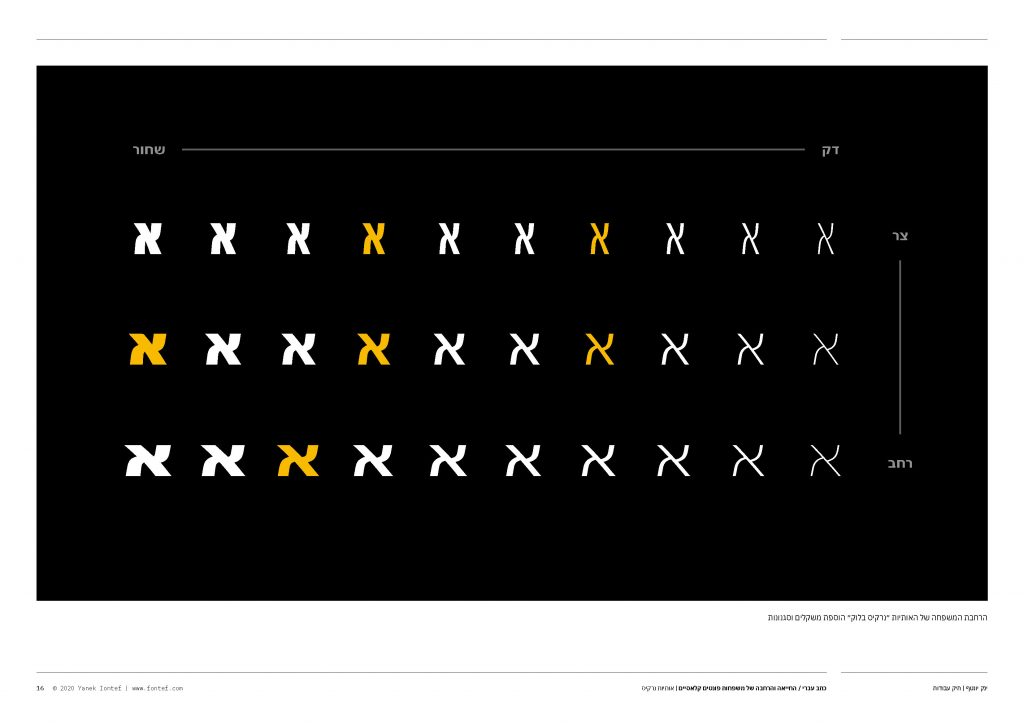 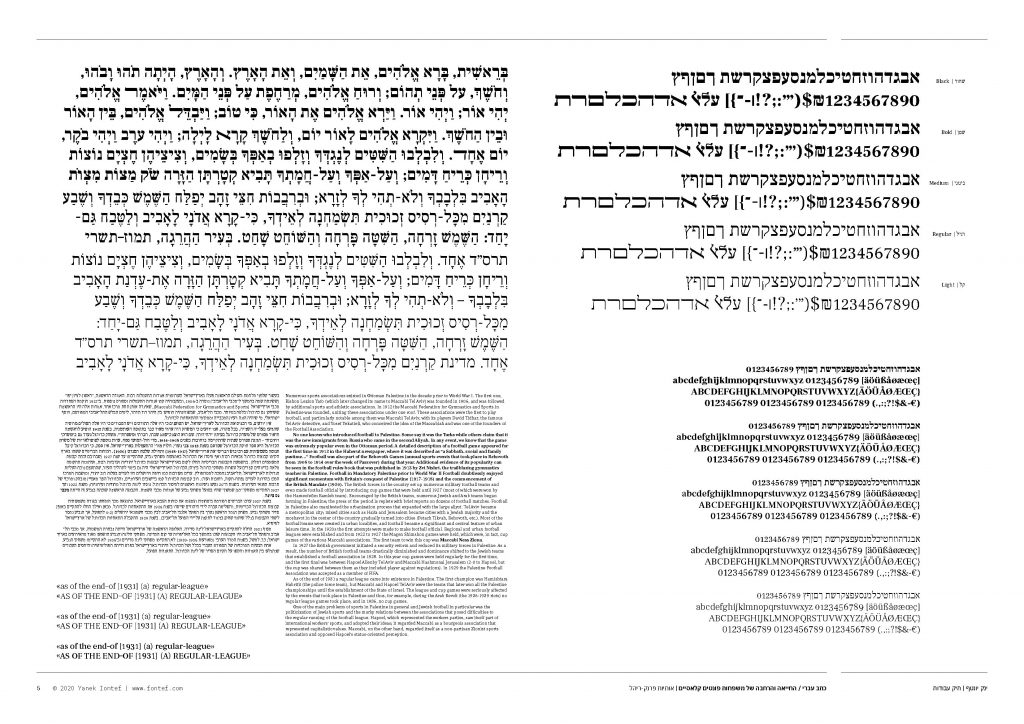 Born 1963, Yanek Iontef is a graphic designer who specializes in letter design and typography. He graduated from Bezalel Academy of Arts and Design’s Department of Visual Communication (1989). In his professional work, he combines historical form research in the typography field and a dialogue with contemporary design values, as well as the design and development of original Hebrew and other fonts.

Over the course of several typographic projects, Yanek has collected rare materials from different eras of the Hebrew script, catalogs of relief printing imagesetters , and research books from Israel and elsewhere on the topic of the Hebrew script. He also obtained archives and rare materials from the collections of senior Hebrew letter designers, such as Henry Friedlander and Zvi Narkiss.

He uses these materials in the development and design of numerous Hebrew and multilingual typographic families, which are publicly distributed through Fontef, the type foundry he established in 1994. These fonts have served newspapers, magazines, publishing houses, commercial corporations, advertising agencies, and many others, and constitute an influential factor in the typographic landscape and local visual language in an age of change and transition from typesetting and image setting to the digital age.

“Contrary to widespread concern about the new technology leading to the loss and destruction of the Hebrew script, the current reality of which I am a part enables making a large-scale impact on the cultural space, and providing access to forgotten treasures of Hebrew typographic families to designers and typography enthusiasts in Israel and abroad.”

Yanek Iontef presents a tremendous body of work in the field of design, preservation, restoration, and research of the Hebrew script. He is a brilliant typographer who acts as a creator, researcher, and conservator and, in so doing, preserves, rejuvenates and shapes the local visual culture.

His presence in the local design arena is prominent and constitutes a clear marker of quality in the field of typographic design in Hebrew. His unique and rigorous lifetime achievement will persist in the local visual culture for the decades to come, as well as in the distant future, and will be recorded as an important chapter in the history of Hebrew typography.

His presence is especially noteworthy when examined in relation to its influence on and contribution to the work of other designers. His studies allow for new uses and design interpretations in multiple voices and different arenas, to which the general public is exposed in every encounter with the written language.
In recognition of his outstanding and significant contribution to the local visual culture, the jury panel named Yanek Iontef as winner in the Senior Designer category of the 2020 Edmond de Rothschild Design Award in the field of Visual Communication.